← back to
Umland Records
Get fresh music recommendations delivered to your inbox every Friday.
We've updated our Terms of Use. You can review the changes here. 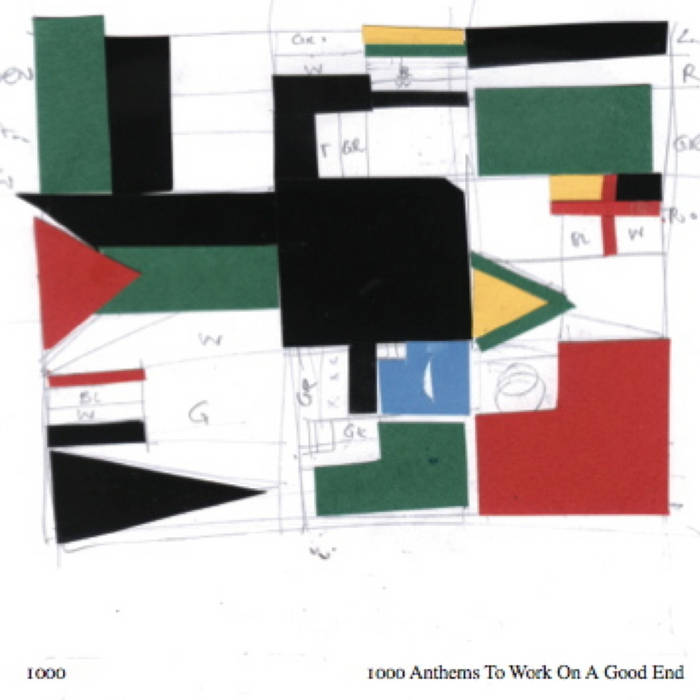 The quartet “1000“ started recomposing classical compositions in 2004. In 2015/16 the idea of developing a new repertoire based on national anthems broached for the first time. The fact that an anthem is a point of reference for a whole nation makes an interpretation of such a melody recognizable for everybody. If you take Mauricio Kagel’s composition “10 Marches to Miss the Victory” for example, you can see how populist elements can be used for very subtle manipulation. Karlheinz Stockhausen called national anthems “the most popular music you can conceive of”.
The fact that many anthems sound alike is primarily rooted in historical reasons, but there are also many hymns that possess a very different character.

Afghanistan had 6 different anthems over the course of the 20th century, a reflection of political changes, similar to the fate of Cambodia. These songs form the core of the present CD. In addition to those of Afghanistan and Cambodia, we present anthems that have been chosen strictly for artistic reasons, plus some improvisations and a tune that was specifically composed for this project.

You will hear the national anthem of Syria (we felt this was a “must” in 2017) alongside an early Chinese anthem and the anthem from Niue (an island atoll nation in the South Pacific) that we choose purely for their beauty. One original composition, “Refugia”, is an attempt to depict the escape of people from their homes musically.

The selection of these songs as well as their interpretations were not researched by musicologists - the choice was made intuitively and is based on the impulse to search out and play melodies. Our interest is devoted to how melodies affect humans and how anthems work to gather people together. It is not our intention to make an up-to-the-minute political statement here. Some of our arrangements may irritate people, but hopefully they won’t insult anyone.

Many groups of people have crossed the territory that we call Afghanistan today, heading towards the warm and fertile Indian subcontinent. In the middle of the 18th century, a state was founded which would later become Afghanistan. In the beginning of the 19th century, Russia made Afghanistan’s northern neighbours into subjects. From the southeast, British India approached. Finally, only Afghanistan was left over between Russia and the British Empire. Britain was afraid the Russians could conquer Afghanistan and thus attacked the country in 1839 and 1878. In 1919, the Afghan people attacked the British territory and won their sovereignty. In 1978, pro-Russian military forces staged a coup and tried to establish a communist government. This brought the mujaheddin to the scene. The USSR sent troops in 1979 to help the Afghan communists, but they proved unable to defeat the mujaheddin, who were supported by the West. At the end of 1991, the USSR vanished and in 1992 the Afghan communists also gave up. The mujaheddin became the new leaders in Kabul. In 1994, the Taliban movement assumed control. But after 9/11 the USA began to take steps to overthrow the Taliban government.

1926-43 (anonymous): The first anthem used by Afghanistan was during its period as a monarchy, and was performed on state visits made by the king. I don’t believe there are any words to this anthem.
1943-73 (Mohammed Farukh): Written in 1930, this was the second anthem in use while Afghanistan was still ruled by an imperial family.
1973-78 (Abdul Ghafoor Breshna): After the abolition of the monarchy in 1973, the Republic of Afghanistan was set up, and this anthem was adopted.
1978-92 (Jalil Zaland): The lyricist of the anthem, which was in use during the communist rule in Afghanistan, was a leading leftist poet in the country, who was also involved in communist and leftist political parties of the era.
1992-99, 2002-06 (Ustad Qasim): Following the establishment of the Islamic Republic, a new anthem for Afghanistan, a mujaheddin battle song, composed back in 1919, was adopted, along with other new national symbols. During the Taliban’s rule of Afghanistan, from 1999 to 2002, Afghanistan was in the unique position of not having a national anthem, as the Taliban, a strict Islamic religious party, banned music throughout the country. Upon the restoration of the old government, the old former anthem was reinstated, but the search for a new anthem was soon requested to once again reflect the new Afghanistan.
2006 (Babrak Wasa): Afghanistan's constitution states that the national anthem of Afghanistan must be in the Pashto language and that it must contain the phrase “Allahu Akbar” (“God is great”). It must also mention the names of the ethnic groups in Afghanistan.

The earliest traces of settlement in the tropical region date from about 4200 BC. There is proof that a wealthy kingdom existed in the 5th century AD on the territory of today’s Cambodia, which was called Funan. At the end of the 7th century, Funan was conquered by the kingdom of Chenla. Both empires were inhabited by Khmer, the people of modern Cambodia. The Angkor empire, established around 802-850 AD, was highly civilized, with approximately 1 million Khmer living within its territory. In 1430/31, the empire was conquered by the Thai people. Thailand and Vietnam fought heavily for the upper hand in Cambodia and introduced a joint administration in 1841. In order to remain in power, the Cambodian king signed a treaty with France in 1863. From 1941, the Japanese ruled Cambodia, but in 1946 the French returned. They allowed the Cambodians to have their own constitution and political parties. In the 1950s, Cambodia’s fight for independence began. From 1953, King Sihanouk took control of the country. After a coup, Lon Nol abolished monarchy and founded the Khmer Republic. The exiled Sihanouk orchestrated the takeover by the Khmer Rouge under Pol Pot in 1975 – the worst period in Cambodia’s history, with an estimated 25% of the population killed. In 1976, the Democratic Republic was established. In 1979, Vietnamese troops seized Phnom Penh, finally withdrawing in 1989.

1941-70 (F. Perruchot/J. Jekyll): The anthem, the so called Nokoreach, was originally adopted in 1941 and reconfirmed in 1947, around the time of independence from France.
1970-75 (written collectively): In the 1960s, Cambodia became more and more involved in the Vietnam War. In 1970, General Lon Nol led a military coup against Sihanouk and formed a pro-American government, the Khmer Republic. The country got a new flag and national anthem, which remained in use until the communist Khmer Rouge seized power in 1975.
1975-76 (F. Perruchot/ J. Jekyll): When the Khmer Rouge conquered Phnom Penh in 1975, they first restored the old royalist symbols of state and made Prince Sihanouk head of state once again.
1976-79 (unknown): In 1976 however the Khmer Rouge declared Cambodia the “Democratic Kampuchea”, and adopted its own anthem. It has been suggested that Pol Pot may have written this anthem himself. Since the Khmer Rouge were recognized as the legitimate government of Cambodia by the United Nations, its anthem continued to be presented as the national anthem of Cambodia in the West until the restoration of the monarchy in 1993.
1979-89 (unknown): After Vietnamese forces invaded Cambodia in 1979, Cambodia became the People’s Republic of Kampuchea. Again, a new flag and national anthem were adopted.
In 1989, the government, in an attempt to gain greater international recognition, changed the state symbols. Not much is known about the anthem used from 1989 to 1991. In 1991, a UN peace plan was signed. Some sources mention that a song without lyrics, composed by Prince Ranariddh, was used as the national anthem during this time, yet not much is known about this anthem.
1993 (F. Perruchot/ J. Jekyll): In 1993, the monarchy was restored and internationally recognized as the government of Cambodia.

Bandcamp Daily  your guide to the world of Bandcamp

Semiratruth joins the show to discuss their latest release, "loading..".